Image Classification and Segmentation with Tensorflow and TF-Slim

A post showing how to perform Image Classification and Image Segmentation with a recently released TF-Slim library and pretrained models.

In this post I want to show an example of application of Tensorflow and a recently released library slim for Image Classification, Image Annotation and Segmentation. In the post I focus on slim, cover a small theoretical part and show possible applications.

I have tried other libraries before like Caffe, Matconvnet, Theano and Torch. All of them have their pros and cons, but I always wanted a library in Python that is flexible, has good support and has a lot of pretrained models. Recently, a new library called slim was released along with a set of standart pretrained models like ResNet, VGG, Inception-ResNet-v2 (new winner of ILSVRC) and others. This library along with models are supported by Google, which makes it even better. There was a need for a library like this because Tensorflow itself is a very low-level and any implementation can become highly complicated. It requires writing a lot of boilerplate code. Reading other people’s code was also complicated. slim is a very clean and lightweight wrapper around Tensorflow with pretrained models.

This post assumes a prior knowledge of Tensorflow and Convolutional Neural Networks. Tensorflow has a nice tutorials on both of these. You can find them here.

The blog post is created using jupyter notebook. After each chunk of a code you can see the result of its evaluation. You can also get the notebook file from here. The content of the blog post is partially borrowed from slim walkthough notebook.

I am also using scikit-image library and numpy for this tutorial plus other dependencies. One of the ways to install them is to download Anaconda software package for python.

First, we specify tensorflow to use the first GPU only. Be careful, by default it will use all available memory. Second, we need to add the cloned repository to the path, so that python is able to see it.

Now, let’s download the VGG-16 model which we will use for classification of images and segmentation. You can also use networks that will consume less memory(for example, AlexNet). For more models look here.

The model that we have just downloaded was trained to be able to classify images into 1000 classes. The set of classes is very diverse. In our blog post we will use the pretrained model to classify, annotate and segment images into these 1000 classes.

Below you can see an example of Image Classification. We preprocess the input image by resizing it while preserving the aspect ratio and crop the central part. The size of the crop is equal to the size of images that the network was trained on. 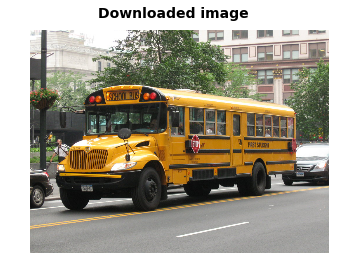 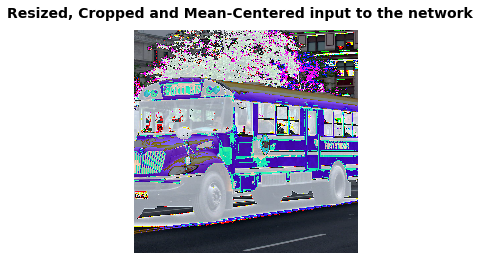 As you can see from the previous example, only a certain part of the original image is being processed by the network. This is good only for cases when we want to get a single prediction for an image.

Sometimes we want to get more information from an image. For example, it would be great to know about all the objects that are present in the image. For example, network would tell us that it found a school bus, other cars and building. Using this information, we can create a search engine that will be able to give us all images that has a particular object in them. This can be seen as a simple case of Image Annotation.

But what if we also want to get spatial information about the objects locations. Can the network tell us that it sees a bus in the center of the image and building on the top-right corner? That way we can create a more specific queries for a search engine: “Give me all images where the school bus is located in the middle AND flower pot in the top left corner”.

There are cases when we need to classify each pixel of the image, also know as the task of Segmentation. Imagine, that we have a huge dataset with pictures and we want to blur faces of people there, so that we don’t have to get their permission to publish these pictures. For example, you can see people’s faces being blured in Google Street View. But we only need to blur faces and not other content that might be important. Segmentation can help us in this case. We can get pixels that belong to faces and blur only them. 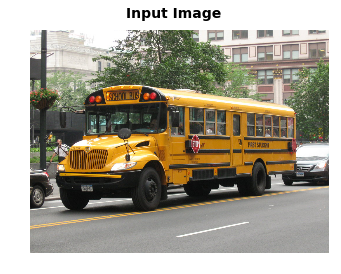 The segmentation that was obtained shows that network was able to find the school bus, traffic sign in the left-top corner that can’t be clearly seen in the image. It was able to locate windows at the top-left corner and even made a hypothesis that it is a library (we don’t know if that is true). It also made a certain number of not so correct predictions. Those are usually caused by the fact that the network can only see a part of image when it is centered at a pixel. The characteristic of a network that represents it is called receptive field. Receptive field of the network that we use in this blog is 404 pixels. So when network can only see a part of the school bus, it confuses it with taxi or pickup truck. You can see that in the bottom-left corner of segmentation results.

As we can see above, we got a simple segmentation for our image. It is not very precise because the network was originally trained to perform classification and not segmentation. If we want to get better results, we will have to train it ourselves. Anyways, the results that we got are suitable for image annotation and very approximate segmentation.

Performing Segmentation using Convolutional Neural Networks can be seen as performing classification at different parts of an input image. We center network at a particular pixel, make prediction and assign label to that pixel. This way we add spatial information to our classification and get segmentation.

In this blog post we covered slim library by performing Image Classification and Segmentation. The post also explains a certain amount of theory behind both tasks.

In my opinion, slim along with pretrained models can be a very powerful tool while remaining very flexible and you can always intermix Tensorflow with it. It is relatively new, therefore, it lacks documentation and sometimes you have to read the source code. It has support from Google and is currently in an active development.